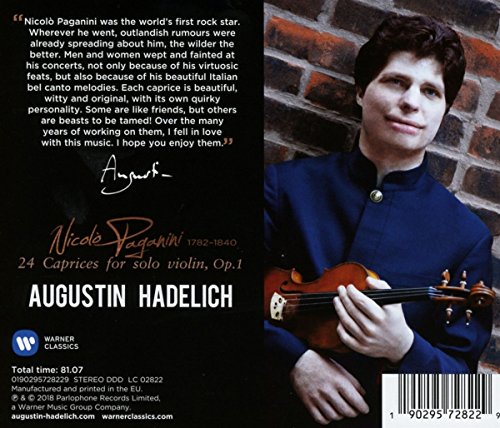 The elegant, but impassioned musicianship of Augustin Hadelich evokes the violinists of the ‘golden age’ of the early and mid-20th century. Winner in 2015 of the inaugural Warner Music Prize, Hadelich now releases his first recording for Warner Classics: Paganini’s 24 Caprices for solo violin. These works of proverbial virtuosity were conceived by the flamboyant Nicolò Paganini to test and showcase every aspect of a violinist’s skills. AsGramophonehas written, Hadelich “meets and surmounts all obstacles, yet its not technical wizardry that most impresses but his musicianship.”Hadelich’s musical personality has been summarised by theWashington Postas “distinct and nostalgic, never a dizzying exhibition of skill devoid of substance”. Similarly,Gramophonehas written that Hadelich “meets and surmounts all obstacles, yet it’s not technical wizardry that most impresses but his musicianship. He makes the musical sense of each piece crystal clear, and his playing has an inner life, each phrase, each note, is felt as it’s played.” Described as a“brilliant violinist” byThe New York Times, in the words ofThe Stradhe is “a masterful musician”.