Looking for BloggersPassion income reports? You’re in the right place.

In the last five years, BloggersPassion generated nearly $500,000 (HALF A MILLION!).

If you’re looking for some blogging motivation or how much we made every year from BloggersPassion, you’re going to love this post.

BeRush (Semrush affiliate program) is one of the biggest income generators for BloggersPassion.

Here’s one of our earning reports from the Bluehost affiliate program.

SPOILER Alert: Here’s the breakdown of all the income reports of BloggersPassion from 2016 to 2020.

As you can see above, we’re constantly growing our income year after year from BloggersPassion despite facing issues like COVID 19, freaky updates from Google, a huge competition, and so on.

Are you ready to find more details with each year’s income and breakdown? Let’s get started.

How We Made $500,000 from BloggersPassion? Revealing All Our Income Reports

In the entire year of 2016, we attracted over 315,000 visitors to our site. The best part? Most of that traffic came from Google.

How much we made from BloggersPassion in 2016?

In 2016, we made $21,789 from BloggersPassion. This was the year we doubled our yearly income when compared to the previous years.

Here’s one of the earning reports during Black Friday week.

What Initiatives Did We Take In 2016?

Here are some of the things we did in 2016 to improve BloggersPassion.

In 2017, BloggersPassion received nearly 600,000 visitors. Again, most of that traffic came from search engines like Google.

Have a look at our traffic report for the year 2017.

As you can see above, nearly 90% of those visitors are NEW visitors. When you’re bringing new visitors to your site, it helps you boost your site’s profits and engagement.

How much we made from BloggersPassion in 2017?

Here’s one of the earning screenshots from HostGator sales.

What Initiatives Did We Take In 2017?

Here are some of the things we did in 2017 to improve BloggersPassion.

Have a look at the Google Analytics data for 2018.

As you can see above, the overall bounce rate is declining every year (which is great) and also the average session duration increased when compared to the previous years.

How much we made from BloggersPassion in 2018?

What Initiatives Did We Take In 2018?

Here are some of the things we did in 2018 to improve BloggersPassion.

As you can see above, the blog’s bounce rate considerably went down (which is excellent) to around 65% and average session duration went up to 3 minutes per session.

How much we made from BloggersPassion in 2019?

What Initiatives Did We Take In 2019?

Here are some of the things we did in 2019 to improve BloggersPassion.

Last year, we generated more than 717,000 visitors to our site. By far, 2020 was the best year for BloggersPassion in terms of traffic.

How much we made from BloggersPassion in 2020?

Here’s one of the earning screenshots from Razorpay (the same platform we used to sell our eBooks).

We also used platforms like Instamojo, Gumroad, etc where we generated even more sales (and NOT including all those screenshots here).

In case if you’re curious, you can find some of the earning reports of our eBooks from this post where you can find earning screenshots from Gumroad and Instamojo.

What Initiatives Did We Take In 2020?

Here are some of the things we did in 2020 to improve BloggersPassion.

One BIGGEST Lesson from 10+ Years of BloggersPassion Journey

We launched BloggersPassion in 2010. We already shared our blogging journey where we discussed a lot of things like how our website looked like and what was the initial year’s traffic, how we’re monetizing our blog, and so on.

Here’s ONE biggest lesson we learnt from our journey so far.

That means, even after 6 years of launching BloggersPassion, this blog generated us only around $10K per year.

So how things transformed all of a sudden? How did we go from making $10,000 per year to earning over $10,000 every single month within just 4 years?

It’s the same reason Warren Buffett made 99% of his wealth after his 50th birthday.

Exponential growth always looks smaller in the beginning. But if you consistently grow, you’ll see the Domino Effect.

Have you read the book “The One Thing” by Gary Keller? If not, you should definitely grab a copy as it’s a must-read for bloggers and marketers.

In the book, the author discusses the Domino Effect and tells the fact that a single domino is capable of bringing down a domino 50% larger than itself.

For example, if you start with a two-inch tall domino, domino 18 can take down the Leaning Tower of Pisa! Then, the 23rd domino, it can take down the Eiffel Tower and the 31st the Mount Everest, and Domino 57 the moon.

That’s the power of consistent growth.

So our BIGGEST lesson here is, when you identify the most important goal and make progress every single year, you’ll suddenly start growing exponentially (after a few years).

That’s what the Domino effect is all about. Think about it. Start small, be consistent, and plan for the long term. You’ll also see the domino effect in your life and work.

Here are some of the most asked questions about BloggersPassion earnings and traffic.

Who is the founder of BloggersPassion?

Anil Agarwal is the founder of BloggersPassion who launched it in 2010.

What topics does BloggersPassion cover?

BloggersPassion primarily covers topics around profitable blogging, affiliate marketing and SEO. You’ll also find lots of interviews with amazing bloggers to get inspiration and ideas around building a better blog.

In a nutshell, Bloggers Passion is where you can find everything related to building a profitable blog that gets more search traffic and sales.

How does BloggersPassion make money?

We make most of our money selling affiliate products. We mostly promote the products that we regularly use and like. Besides affiliate marketing, we also earn from selling our own products such as eBooks.

How much does BloggersPassion earn per month?

What is the email of Anil Agarwal from BloggersPassion?

If you have any blogging or SEO related questions, you can email Anil Agarwal at anil@bloggerspassion.com

Final Thoughts On Our Earning Reports

The #1 secret to building a money-making blog is this: increase your website traffic from search engines like Google. The more search traffic you attract, the easier it is for you to boost your sales and conversions.

We created these BloggersPassion traffic and income reports to motivate new bloggers to make money from blogging. Yes, making thousands of dollars from blogging is possible but you need to be consistent.

Did you find our income reports helpful? Do you have any questions? Let us know your thoughts in the comments.

Anil Agarwal who owns Bloggerspassion.com, is a full-time blogger and SEO expert who has been helping people build profitable blogs for over a decade. Bloggers Passion has been featured on premium online sites like Forbes.com, Huffingtonpost, Semrush, Problogger, Crazy Egg, The Next Web and so on. 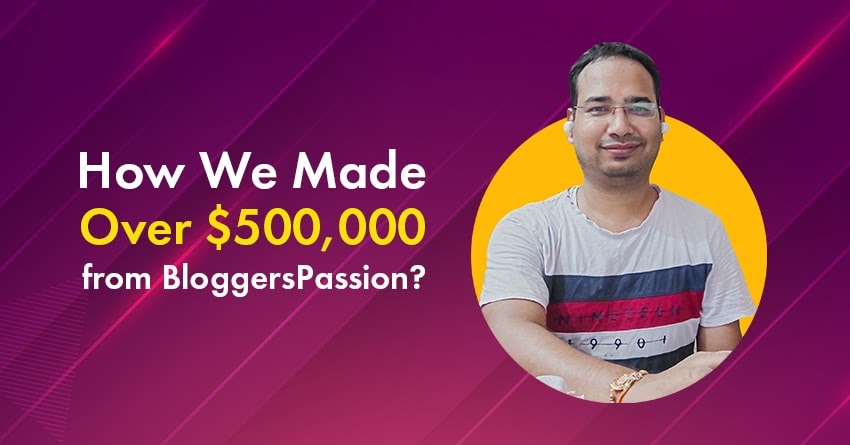